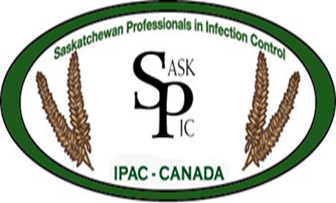 Two infection control interest groups, one from the north of the province and one from the south (under the umbrella of SRNA) made the decision to merge and apply for provincial chapter status in January of 1990. First official meeting of the chapter took place in May of that year. Initial meetings of SASKPIC were held in Davidson (mid-point between Saskatoon and Regina) to enable more provincial members to attend. Forty-three participants attended one of the early meetings of the group.

SASKPIC received the 3M award for chapter activities in the years of 1994 and 1998.

A logo for the SASKPIC chapter was designed in 2002. Pins designed with the logo were available to chapter members upon registration and for sharing at the IPAC Canada national conference.

In 2007, a membership survey was conducted to identify how the chapter could better meet the needs of its members. The decision to move to Telehealth presentations for some of the chapter meetings arose from the results of the survey.

Telehealth sessions. offered in the Spring and Winter were commenced in 2008. There is an annual workshop and membership meeting held the third Friday in September to address education and networking needs of the group.

The 1st National Conference was held in Saskatoon in 2012, when Donna Wiens was the Past-President of IPAC-Canada and Vi Burton was the President of SASKPIC.  Eric Pederson was the Volunteer Coordinator and Brenda Temple coordinated the 7th Annual Fun Run or Walk for IFIC.